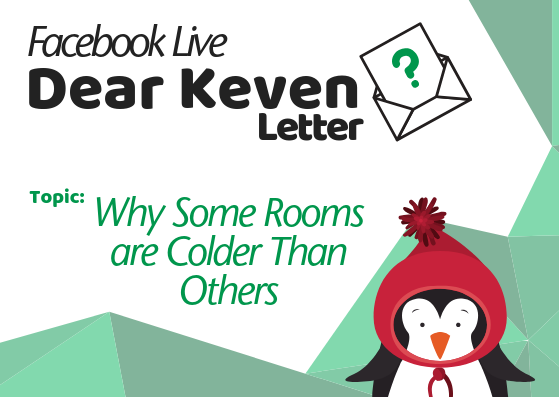 Why Are Some Rooms Colder Than Others?

We’ve all experienced it at some point in either our own homes, our parent’s home, or even our friend’s place: that one room that’s way colder than the others.

While most of the time the temperature difference isn’t so drastic that an extra sweater or electric blanket wouldn’t be sufficient, sometimes there are rooms that are so unbearably cold you need to call in an expert. In this week’s Facebook Live video, Keven and our dispatcher, Val, discuss why this might be.

Many people’s first thought is that their furnace might be too small for the home, and that’s why a certain room isn’t getting enough heat. But, as Keven mentions, this is often not the case. While the heat distribution in your home does, in part, rely on a properly sized furnace, the issue that is commonly associated with this is how the ducting in run in the house. Sometimes there aren’t enough ducts run to certain rooms of the house, sometimes ducts are so far away from the furnace that they get too little air flow, and sometimes there are dampers closing off air flow to a duct.

The good new is, that often times these ducting errors can be fixed. Whether that be by adding addition ducting runs in the home or checking dampers, most applications can be improved.

If you’re ever in need of adding additional vents to your home, give Acclaimed! a call for a quote!

Furnaces from low as $59/month. Air Conditioners from just $55/month!